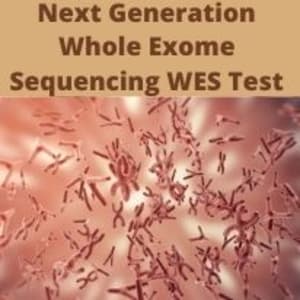 Most of the disease-causing mutations that science has been able to identify so far are located within the exons. Whereas most genetic tests focus on a single gene or on a set number of predetermined genes, a whole-exome sequencing test examines 23,000 genes simultaneously. Whole-exome sequencing provides a comprehensive outlook on coding genetic variation to a degree that has never been possible before, surpassing traditional methods for the study of common, rare and novel genetic variations, such as SNP arrays or single-locus resequencing studies.

WES provides the right balance of insights and price Whole Genome Sequencing (WGS) takes too long, is often cost-prohibitive, and the data needed is usually in the exonic regions Sanger sequencing and microarray are not cost-effective for large target regions Targeted pre-defined panels often don’t contain all of the data needed for the project

What is Whole Exome Sequencing?

WES is a cost-effective alternative to Whole Genome Sequencing. The human exome consists of approximately 180,000 exons, which constitutes about 1-2% of the human genome. This test is performed by Next Generation Sequencing. These exon protein-coding regions harbour variants which are much more likely to have severe consequences than those in the remaining 99% of the genome. Instead of incurring the time and cost of sequencing the whole genome, many researchers and clinicians can obtain the decision-making data they need by sequencing the exome. Whole Exome Sequencing can identify genetic variants responsible for:

WES provides the right balance of insights and price

Otogenetics Leverages State of the Art Techniques to Ensure Quality

Who should have Whole Exome Sequencing?

WES can be done in pregnancy, childhood or adulthood. It is usually done for one or more of the following reasons:

Benefits of the Whole Exome Sequencing:

The Whole Exome Sequencing may find a genetic cause for your or your child’s signs and symptoms. This may help guide medical care. A genetic diagnosis may give your family information about the chance that you could have other children affected with the same condition. This information may also be useful for other family members.

Whole exome sequencing is attractive for clinical application mainly because it covers actionable areas of the genome to determine the variations in the exon regions and identify causal variants of a disease or disease-causing mutations.

Because it is estimated that 85% of disease-causing mutations reside in the exome, a cheaper alternative to whole-genome sequencing, whole-exome sequencing (WES) has become increasingly popular owing to its compromise between cost, genome coverage, diagnostic yield and interpretability.

How does Whole Exome Sequencing work?

During the library preparation, genomic DNA is fragmented, and targeted regions are captured by hybridization using biotinylated oligonucleotide probes in solution. The captured target sequences are isolated using streptavidin beads, and after washing and elution steps, are used for subsequent amplification and sequencing.

What Is Included in the Report?

Genetic changes in genes that are not associated with your or your child’s current disease, but which may have a significant impact on health, will be included in the patient’s report unless you tell us that you do not want this information.