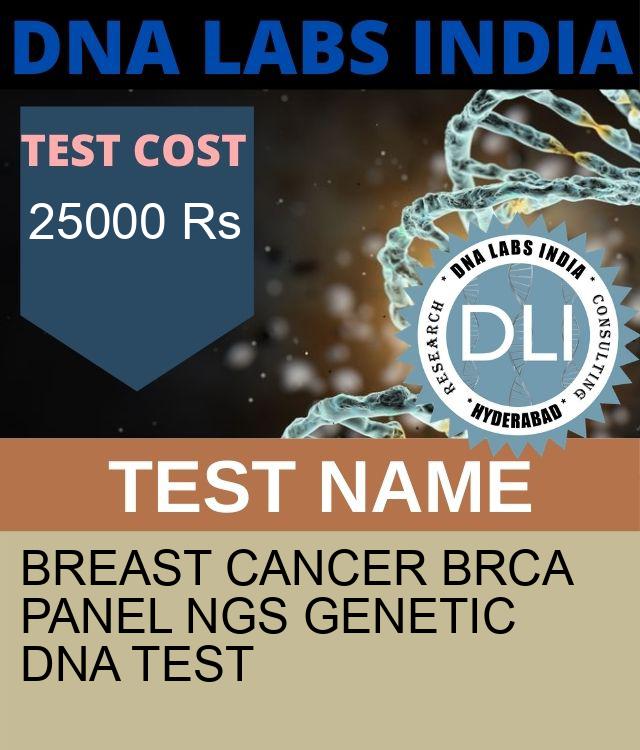 Why to get tested at DNA Labs India for Breast Cancer BRCA1 BRCA2 Gene Test ?

What is a BRCA genetic test?

A BRCA test looks for changes, known as mutations, in genes called BRCA1 and BRCA2. Genes are parts of DNA passed down from your mother and father. They carry information that determines your unique traits, such as height and eye colour. They are also responsible for certain health conditions. BRCA1 and BRCA2 are genes that protect cells by making proteins that help prevent tumours from forming.

A mutation in BRCA1 or BRCA2 can cause cell damage that may lead to cancer. Women with a mutated BRCA have a higher risk of getting breast-ovarian cancer. Men with a mutated BRCA are at a higher risk of getting breast prostate cancer. Not everyone who inherits a BRCA1 or BRCA2 mutation will get cancer. Other factors, including your lifestyle and environment, can affect your cancer risk.

What is it used for?

This test is used to find out if you have BRCA1 or BRCA2 mutation. A BRCA mutation can increase your risk of getting cancer.

Why do I need a BRCA test?

BRCA testing is not recommended for most people. BRCA mutations are rare, affecting only about 0.2 per cent of the U.S. population. But you may want this test if you think you are at a higher risk of having the mutation. You are more likely to have a BRCA mutation if you:

What is the cost of the BRCA Test?

What is the reporting time for BRCA Test?

For reports, it will take 3-4weeks

What happens during a BRCA test?

A health care professional will take a blood sample from a vein in your arm, using a small needle. After the needle is inserted, a small amount of blood will be collected into a test tube or vial. You may feel a little sting when the needle goes in or out. This usually takes less than five minutes.

Are there any risks to the test?

There is very little risk to having a blood test. You may have slight pain or bruise at the spot where the needle was put in, but most symptoms go away quickly.

What is Hereditary Breast and Ovarian Cancer?

A diagnosis of Hereditary Breast and Ovarian Cancer Syndrome (HBOC) is considered when there are multiple cases of breast cancer ovarian cancer on the same side of the family. The chance that a family has HBOC increases in any of these situations:

How is HBOC inherited?

Normally, each person has 2 copies of each gene in their body's cells: 1 copy is inherited from a person's mother and 1 copy is inherited from a person's father. HBOC follows an autosomal dominant inheritance pattern. This means that a mutation needs to happen in only 1 copy of the gene for the person to have an increased risk of getting that disease.

This means that a parent with a mutation may pass along a copy of the gene with the mutation. Therefore, a child who has a parent with a mutation has a 50% chance of inheriting that mutation. A sibling or parent of a person who has a mutation also has a 50% chance of having inherited the same mutation. However, if the parents test negative for the mutation (meaning each person's test results found no mutation), the risk to the siblings significantly decreases but their risk may still be higher than the average risk.

How Do I Interpret the Test Results?

A negative test result means that a breast cancer mutation was not identified. If another testing has identified a mutation in your family, a negative test means you do not have the specific mutation. Therefore, your risk of cancer is the same as someone in the general population who has a family history of breast cancer.

If a BRCA1 or BRCA2 mutation has not been previously found in your family, a negative result should be interpreted cautiously. There is still a chance that you may be at higher risk for breast cancer because of changes in genes other than those that doctors can test for. A positive test result means that a mutation known to raise the risk of breast and ovarian cancer was identified.