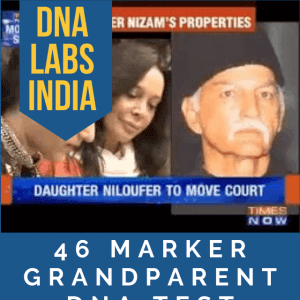 The Grandparent Lineage Test is performed to determine whether a couple (either of the grandfather or the grandmother) is a biological grandparent of the child. Grandparentage Tests are done when an alleged father is not available to take the test. Through this test, the lineage is established without any need for an alleged or biological father at all.

Reasons for a grandparent DNA test

The grandparent DNA test is often required when parents of the alleged father or indeed the biological mother are not available. This is to test a child’s missing links in their biological relationship with the family.

Other cases include the grandparents questioning if the child is their biological grandchild. DNA tests such as these can provide the answers to bring families closer together.

How does Grandparent Testing Work?

The test works on the fact that a child inherits half of his or her DNA profile from each of their parents. In other words, half the child’s DNA profile matches their mother and the other half matches the father.

DNA samples are taken from mouth swabs to generate a DNA profile for each test participant. Next, the DNA profiles and determine the likelihood of a relationship. In this case, the likelihood that the participants are biologically related as grandparent and grandchild.

Can I use Grandparents to establish paternity?

Yes, grandparents can be tested to establish paternity. For some families, proving paternity with a DNA test can be a challenge, particularly if the alleged father is not available for testing or is unwilling to provide a DNA sample.