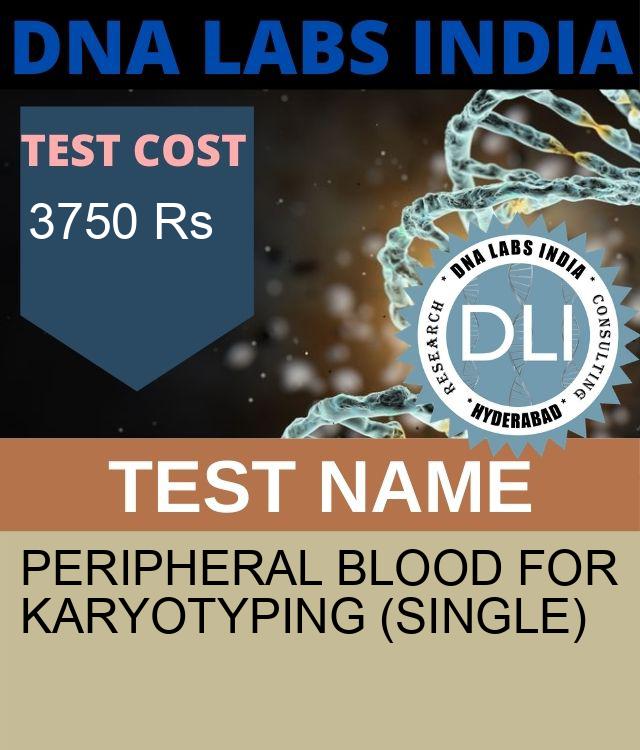 Why to get tested at DNA Labs India for Peripheral blood for karyotyping (SINGLE) ?

Doctor recommend karyotyping test to detect chromosome abnormalities, thus to help diagnose genetic diseases, some congenital disabilities, and certain disorders of the blood and lymphatic system When pregnancy screening tests are abnormal Whenever signs of a chromosomal abnormality-associated disorder are present Bad obstetric history Recurrent pregnancy loss Infertility Primary amenorrhea Dysmorphic features of a newborn When signs of a chromosomal abnormality or associated disorder are present When a specific abnormality has been detected in a family member When a person has leukaemia, lymphoma, myeloma, myelodysplasia or another cancer and an acquired chromosome abnormality is suspected

Peripheral blood for karyotyping (SINGLE) is performed using Cell culture methodology. Sample that have to be given is Peripheral blood in Sodium Heparin Vacutainer (2ml) for this test. You can expect results in 7-9 days

What type of sample is required for karyotyping?

What is being tested in Karyotyping?

In Karyotyping lymphocytes from peripheral blood are cultured, using mitogens to stimulate the transformation of the lymphocytes into mitotically active cells. The timing of harvesting of the cells is engineered such that a maximum number of cells are in metaphase.

The cells are then fixed and spread onto a slide. The chromosomes are stained using many stains, usually, Giemsa  (G-banding and R-banding), which produces banding patterns on the chromosomes with a band resolution of 400 – 650 bands per haploid chromosome set.

The chromosomes with their bands are then examined microscopically for abnormalities such as loss or gain of entire chromosomes, translocations of all or part of an arm of one chromosome to another, or more subtle changes in banding patterns associated with various genetic syndromes. The chromosomes are photographed and rearranged into pairs for examination (a karyogram).

The benefits of karyotyping are:

The limits of karyotyping are:

It is important to note that classic karyotyping is timeconsuming, with the preparation of cells for examination taking several days. Also, live lymphocytes are required, so blood samples need to arrive at the laboratory within a maximum of 48 hours after sampling, preferably sooner, to avoid failure of cell growth in culture.

The test is performed by:

Some chromosomal disorders that may be detected include:

How is the sample collected for testing?

How is the karyotyping test used?

A chromosomal karyotype is used to detect chromosome abnormalities and thus used to diagnose genetic diseases, some congenital disabilities, and certain disorders of the blood or lymphatic system.

It may be performed for:

When is karyotyping test ordered?

Chromosome analysis may be ordered when a fetus is suspected of having a chromosomal abnormality when an infant has congenital abnormalities, when a woman experiences miscarriages or infertility, and when an adult shows signs of a genetic disorder.

It may also be ordered to detect the presence of a chromosomal abnormality in family members when it has been seen in a child or another family member.

It may be ordered to detect acquired chromosomal abnormalities when an individual has leukaemia, lymphoma, myeloma, refractory anaemia, or another cancer.

What does the karyotyping test result mean?

Interpretation of test results must be made by a person with specialized training in cytogenetics. Some findings are relatively straightforward, such as an extra chromosome 21 (Trisomy 21) indicating Down syndrome, but others may be very complex.

Although there will be typical signs with specific chromosomal abnormalities, the effects and the severity may vary from person to person and often cannot be reliably predicted.

Some examples of abnormalities that chromosome analysis may reveal include:

Duplications, deletions, translocations, and genetic rearrangements can cause a myriad of health and development issues. It depends upon what genes are missing or are present in too many copies.

Some genetic rearrangements will be variations that do not cause noticeable symptoms. Balanced translocations (where two chromosomes have swapped portions of themselves but all of the genetic material is present) may cause no problems for the person who has them but may cause problems in their children.

Many hematologic and lymphoid malignancies (e.g., leukaemia, lymphoma, myeloma, myelodysplasia) are associated with chromosomal abnormalities, which can help diagnose the disease and predict the clinical course of the disease.

Why do the drawbacks of karyotyping test?

Some chromosome alterations are too small or subtle to detect with karyotyping. Other testing techniques such as fluorescent in situ hybridization (FISH) or a microarray may sometimes be performed to investigate chromosomal abnormalities further.

People can have cells in their body with different genetic material. This happens because of changes early in the development of a fetus that leads to the development of distinctly different cell lines and is called mosaicism. An example of this is some cases of Down syndrome. The affected person can have some cells with an extra third chromosome 21 and some cells with the standard pair.

Should everyone have a karyotyping test done?

Chromosome analysis is frequently performed, but it is not indicated as a general screening test. The majority of people will never need to have one done.

Why does the karyotype take several days to perform?

The cells that are tested must be cultured and cell division promoted. The amount of time that this takes will vary from sample to sample. Highly sophisticated, abnormal karyotypes may require a longer time to evaluate.