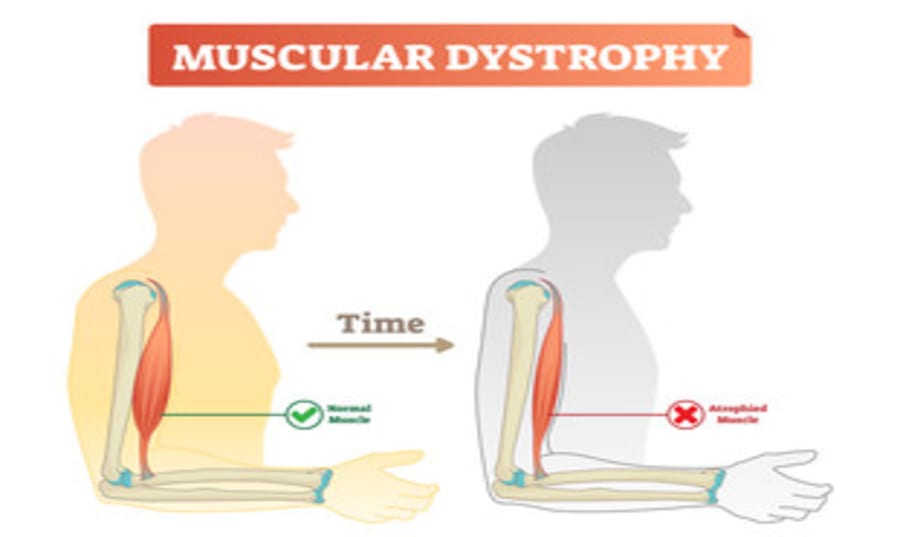 What are Muscular Dystrophies?

Many, indeed most, neuromuscular disorders have a Mendelian basis. Partly for this reason, and partly because of the severe chronic disability produced by many of them, they represent a major category of genetic counselling requests and referrals. The muscular dystrophies, a large group of progressive, primary muscle disorders, form a particularly important problem, made more complex by their heterogeneity. On account of the prominence of the X-linked Duchenne muscular dystrophy, though, many laypeople (and some doctors) still have the impression that all muscular dystrophy affects boys but is carried by girls.

The first task in genetic counselling is thus to establish the precise diagnosis beyond all reasonable doubt, something that is now normally possible using a combination of clinical and molecular approaches. Clinical management issues (especially respiratory and cardiac complications) are important and complex in muscular dystrophies. It is still sometimes the case that families seen for genetic counselling have had no expert clinical support, so ensuring that this is provided is an essential part of any consultation.

Duchenne muscular dystrophy (DMD) (early-onset Xp21 muscular dystrophy) is one of the major problems in genetic counselling for paediatricians and neurologists, as well as for clinical geneticists. Its X-linked recessive mode of inheritance means that numerous female relatives may be at risk of being carriers, even with only a single affected individual in the family. It is essential that they be advised accurately and that all available information is used correctly in determining carrier status.

Molecular genetic approaches to diagnosis and the identification of carriers have minimised the former problems with inadequate information or worse the misinformation that used to arise from inaccurate risk assessments. There are now very few families where satisfactory information cannot be given after appropriate molecular studies although, in healthcare settings where these are not available, the older methods of risk estimation may still have some application. These approaches should not yet be entirely forgotten, as disastrous results may otherwise arise for the families concerned.

This condition has seen important progress over recent years and has served as a prototype for other genetic disorders. The gene, located at Xp21 on the short arm of the X chromosome, was isolated by positional cloning. It is the largest human gene (more than two million base pairs, including the non-coding elements) although its protein is not the largest (which prize goes to another muscle protein, titin).

The size and composition of the gene make recombination within it frequent so that even DNA markers within the gene can have a significant rate of recombination with a family’s mutation. However, a high proportion of cases (around two-thirds) result from large deletions including one or more exons, and a smaller number results from exonic duplications. Methods of quantifying the copy numbers of exons in the gene can therefore recognise the underlying cause of the disorder in 70% of cases and also identify females.

The exceptionally high levels of serum creatine kinase seen in presymptomatic cases of DMD leave no doubt that the large majority of affected males (not carriers) can be detected soon after birth (nearly 90%). Cord blood values are too variable for this, but population screening of males can be undertaken using the newborn samples collected on filter paper for phenylketonuria (PKU) testing at 4–5 days or even earlier. There is still debate as to whether this approach is justified as a service at present, for a number of reasons.

The justification would be to avoid the often long diagnostic odyssey from clinical presentation to diagnosis and to give parents the opportunity to access genetic counselling and perhaps prenatal diagnosis in future pregnancies if they wish to avoid a recurrence.  However, some families would much prefer not to know about this lethal disorder at such an early stage if immediate treatment is not going to make a major difference.

While we now know that Becker muscular dystrophy (later-onset Xp21 muscular dystrophy) is determined by mutations at the same locus as DMD, it is valuable to consider this form separately, because the clinical and genetic problems are somewhat different. Onset and course vary greatly from family to family, and asymptomatic males must be checked carefully, even in adult life, before being pronounced unaffected.

Isolated male cases can be distinguished from other muscular dystrophies by the use of DNA analysis on blood and dystrophin analysis of muscle. Many patients with BMD develop symptoms in adolescence and remain ambulant into adult life, though with increasing disability. This creates a totally different genetic counselling situation for DMD, since many patients will reproduce, and all their daughters will be obligatory carriers. Since no offspring will be affected, the genetic risks may well be forgotten or ignored by the time grandchildren at risk are born.

The approach to the investigation to establish a precise molecular diagnosis – is changing. In the past, muscle biopsy to permit an analysis by immunohistochemistry was key to distinguishing the different types. Analysis of the biopsy would then guide the selection of the appropriate molecular genetic investigations. With the advent of next-generation sequencing, however, the simultaneous sequencing of many genes has become feasible, so that the need for a muscle biopsy to guide the choice of genes to be analysed is becoming much less relevant. Muscle biopsy may still be required in some circumstances but will be needed progressively less often.

This is often X-linked, determined by a specific gene for the protein ‘emerin’, allowing specific mutation testing in some families. Affected males and some carrier females are at risk of serious cardiac conduction defects, even though weakness is often mild. Some clinically similar families follow autosomal dominant inheritance, and the disorder is due to defects in the gene LMNA.

This is a variable autosomal dominant disorder that is often mild but is seriously disabling in 15% of cases. Although the gene is 95% penetrant by early adult life, careful examination to exclude minimal signs is essential in counselling asymptomatic family members. Serum CK levels are often normal in mild or presymptomatic cases.

Molecular studies have greatly helped to resolve this confusing and heterogeneous group. Most are recessively inherited and due to defects in molecular components of the muscle membrane and contractile complex. The severe and extremely rare (except in North Africa) autosomal recessive dystrophy clinically resembling DMD should be considered, along with X-chromosome abnormalities, in an apparent case of DMD in a girl.

The spinal muscular atrophies are a group of anterior horn cell disorders that are distinct from the primary myopathies on clinical, electromyographic, histological and molecular grounds. The great majority of all childhood proximal types follow autosomal recessive inheritance so that sporadic cases should be counselled as such in terms of risk for sibs, even if it is difficult to assign them to a particular type. More than 95% of cases are allelic, caused by deletions in a specific gene on chromosome 5q (SMN1).

In the most common type, type I, known as severe infantile spinal muscular atrophy (Werdnig-Hoffmann disease), onset is at or shortly after birth, with death – in the absence of treatment – invariably before 2 years and usually before 18 months. Severity in other affected sibs is closely correlated, so that the chance of a subsequently affected infant surviving in the long term is very small, as is the chance of an infant who is clinically normal at 6 months going on to develop the disease.

Other types of spinal muscular atrophy

Distal spinal muscular atrophy is more likely to be confused clinically with Charcot-Marie- Tooth disease (see later in this chapter) than with the types described earlier, which are proximal in distribution. Inheritance is usually autosomal dominant, even in childhood-onset cases; the course is often very slow. There are numerous rare types of SMA, whose genetic basis is becoming clearer. An example is the autosomal dominant distal spinal muscular atrophy with vocal cord involvement (HMN7A).