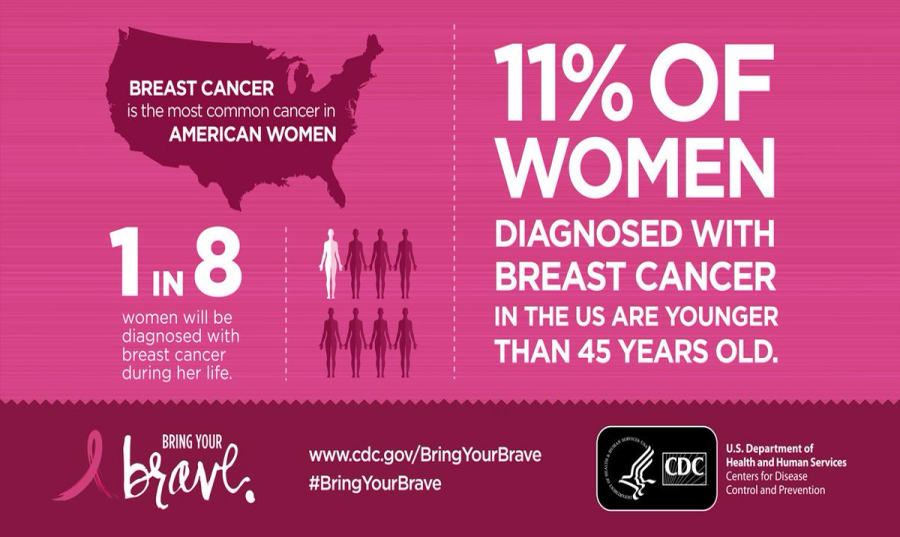 This is the third indication that Olapali was approved in the United States. In the United States, Olapali has been used to treat nearly 4,000 patients with advanced ovarian cancer, and the approval of this new indication has brought a new gospel to breast cancer patients with BRCA mutations, which will definitely redefine the late stage. The treatment path for breast cancer.

What is the germline BRCA mutation?

The occurrence and development of breast cancer are the results of multiple factors such as genetic factors, hormone levels, immune status, physiological conditions, living habits, and environment. These factors lead to gene mutations in normal cells, induction of oncogene activation or inhibition of tumour suppressor genes.

Therefore, breast cancer patients and people with high-risk factors should recommend the detection of the BRCA gene.

The BRCA gene is divided into BRCA1 and BRCA2, which are two important tumour suppressor genes located on chromosomes 17 and 13 of a human nucleus. The proteins they produce are used to repair DNA damage and play an important role in maintaining the genetic stability of the cells. If any of these genes are mutated or altered, DNA damage may not be properly repaired, resulting in impaired cell stability and the possibility of additional genetic alterations leading to cancer.

The most famous carrier of the BRCA gene is the Hollywood actress Angelina Jolie. Because she was found to carry the BRCA gene inherited from her mother, her risk of breast and ovarian cancer was as high as 87% and 50%, so Julie chose to start with a strong first, at the age of 37, prophylactic resection of the bilateral breast, 39 Years old and preventive removal of the ovaries, shocked the world!

What is metastatic breast cancer?

Metastatic breast cancer is the most advanced stage of breast cancer. At this stage, cancer cells have spread to other parts of the breast, most commonly the lungs, brain, and bones.

In the past three decades, despite the increase in related treatment options, there are currently no drugs that can cure patients with metastatic breast cancer. After diagnosis, only 26.9% of patients survived for more than five years. Therefore, the main purpose of treatment is to delay the progression of the disease as much as possible and to improve or at least maintain the quality of life of the patient.

What is the efficacy of Olapali?

The FDA approved Olapa for the use of BRCA mutations, HER2-negative metastatic breast cancer, based on the drug's OlympiAD Phase III trial data.

302 patients from 19 countries in Europe, Asia, North America and South America participated in the trial. About half of them (152) were estrogen or/and progesterone receptor-positive, and the other half (150) were triple-negative. 205 patients were assigned to the olalapril treatment group.

Figure 3 Cover of the article published in NEJM magazine

In terms of safety, the proportion of side effects of grade 3 or higher was 36.6% in the olapali group and 50.5% in the chemotherapy group. Considering that patients who participated in the trial were relapsed or resistant, and lacked effective treatment, the prognosis was poor. This improvement is very meaningful.

Data on the OlympiAD trial was published in the June 2017 issue of the New England Journal of Medicine.

What kind of medicine is Olapali?

Olapali has been the "magic drug" in the minds of patients with ovarian cancer. This AstraZeneca star drug was approved for marketing in the United States at the end of 2014, becoming the world's first listed PARP inhibitor.

The FDA-approved indication is for the treatment of patients with advanced ovarian cancer with BRCA germline mutations that have failed at least 3 chemotherapy treatments. In August 2017, the FDA expanded the indications for olaparibis and approved for the treatment of adult ovarian epithelial cancer, fallopian tube cancer, and primary peritoneal cancer in response to platinum-based chemotherapy (whether or not there is a BRCA detection mutation). Second-line maintenance treatment.

In the olapali treatment group of the OlympiAD Phase III trial, the proportion of patients who discontinued treatment was 5%, compared with 8% in the chemotherapy group.

Olapali is a PARP inhibitor, which, as its name suggests, acts to inhibit the function of the PARP protein. PARP and BRCA are the two main types of proteins responsible for repairing DNA mutations in cells, and they are the "left and right protection methods" that protect our cells.

Metastatic breast cancer is the most advanced stage of breast cancer. The limitation of treatment means that the 5-year survival rate of patients is only 26.9%, especially for triple-negative breast cancer which is considered to be extremely dangerous and prone to metastasis. The treatment of curative effect is mainly based on chemotherapy, endocrine therapy and molecular targeted therapy. The survival time of patients is often short, and the approval of the new indication for the targeted oral drug olalapril means triple-negative metastatic mammary gland. The patient has new hopes.

In addition, this is also good news for patients who are HER2-negative, ER- and PR-positive, because if such patients have a positive BRCA gene test, they may also be suitable for treatment with olapali.

Breast and ovarian cancer are the main arenas of this type of PARP inhibitor, but its value goes far beyond that.

In addition, BRCA gene mutation detection will become a key step in the treatment of tumours. The detection of BRCA mutations in cancer patients can help to better judge the prognosis, the selection of targeted drugs, the choice of chemotherapy regimens, and the risk assessment of family members of family genetic history, helping doctors to select more precise based on the patient's genetic characteristics. Treatment plan.

Currently, olalapril is being used in the treatment of a series of "homologous recombination-deficient" tumours. There is no doubt that more and more patients will benefit from new drugs such as PARP inhibitors.