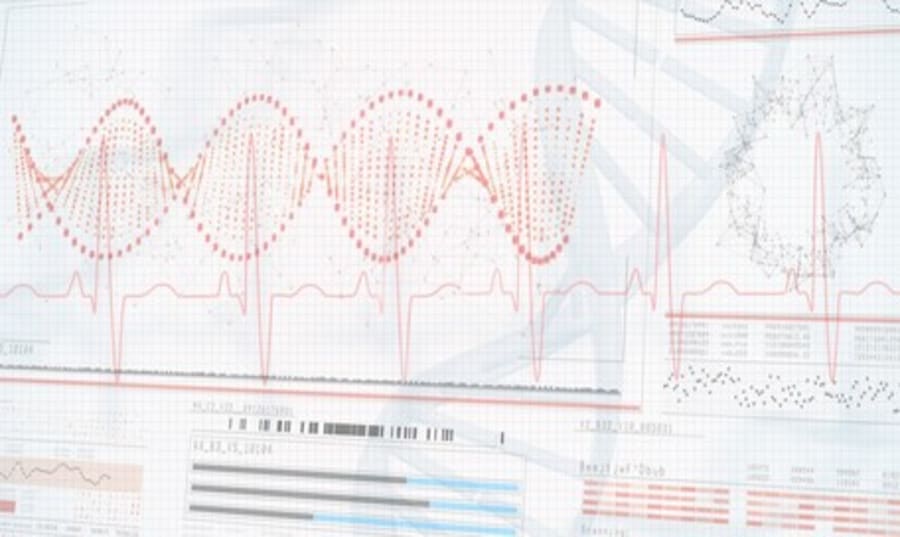 What is Copy Number Variation?

This uses fluorescent-labelled DNA probes complementary to specific sequences of interest, such as those from within regions commonly deleted or duplicated in particular syndromic disorders. Deviations from the normal two copies of an autosomal sequence can be detected in this way with much greater sensitivity than when using light microscopy unaided. This method gives information about the number of copies of the sequence of interest and shows on which chromosomes they are found.

Multiplex ligation-dependent probe amplification (MLPA) is an application of the polymerase chain reaction (PCR) in which it is not the patient’s DNA that is amplified by PCR but, instead, carefully designed probe sequences. Two DNA probes are designed to recognise and anneal to immediately adjacent sequences in a gene of interest; once in place, they are ligated together by a DNA ligase. The two probes carry an additional sequence, not complementary to human DNA sequences, including PCR primer binding sites and additional ‘stuffer sequences’ designed so that the PCR product is of a very specific size. The PCR reaction of the probe sequence, not the human sequence, can then proceed, yielding a quantity of product that relates directly to the number of copies of the target DNA in the patient’s genome.

Because the MLPA amplicons (the sequences being amplified by PCR) can be designed to be of different sizes, it is possible to amplify many such pairs of ligated probes in the same reaction and with the same primers and primer sites for each of the different target sites of interest: the length of the product obtained from each site is distinct. While the PCR primer sites used are the same for all probes, the site-specificity derives from the sequence of the hybridising probes initially used and not from the PCR primers that are located on the sections of the probes that are not complementary to human DNA. It is possible to use several MLPA sites within a commonly deleted region so as to define the extent of the deletion.

Single-stranded sequences of DNA from across the genome (or from specific areas of the genome of particular interest) are laid out in a structured array of microdots. The length of these sequences has become shorter with each new generation of the technology: originally consisting of bacterial artificial chromosomes (BACs) with many kilobases of human DNA inserted, they now usually consist of oligonucleotides (oligos) of some 20+ bases.

DNA from two sources, each labelled with a different fluorescent dye, is allowed to anneal with the array. One source will be the patient under investigation and the other a control. The ratio of the two different light emissions from each dot on the array then indicates the relative number of copies of the corresponding sequence in the two sources of DNA.

The resolution of array comparative genomic hybridisation (aCGH) depends upon the number, size and spacing of the sequences chosen to be included on the array; it will far exceed the resolution of light microscopy. It can be thought of as if FISH or MLPA were being applied to every region of every chromosome at the same time.

The difficulty with high-resolution aCGH is that it detects more variation than we currently know how to interpret with confidence. There is extensive variation in CNVs among healthy individuals, although finding a variant in a healthy individual does not prove that the CNV has no pathogenic significance: penetrance of the disease phenotype may be incomplete and interactions with environmental factors, other CNVs or other genetic variants may be required for its pathological effects to manifest.

Array CGH is the first genomic investigation to have been introduced into clinical practice on a wide scale since the karyotype, which it has largely replaced in many laboratories. The karyotype is still required for studies of specific chromosome rearrangements, such as inversions and reciprocal translocations, but array CGH is also replacing FISH and related investigations, such as searches for subtelomeric deletions.

Array CGH itself must be regarded as a provisional or transitional technology, however, as it will become feasible to replace it with whole-genome sequencing (WGS), as the junction fragments resulting from each site of a chromosome breakpoint will reveal even complex cytogenetic rearrangements. For now, however, the combination of cost and ease of interpretation still favours the use of the karyotype to assess structural chromosomal rearrangements.