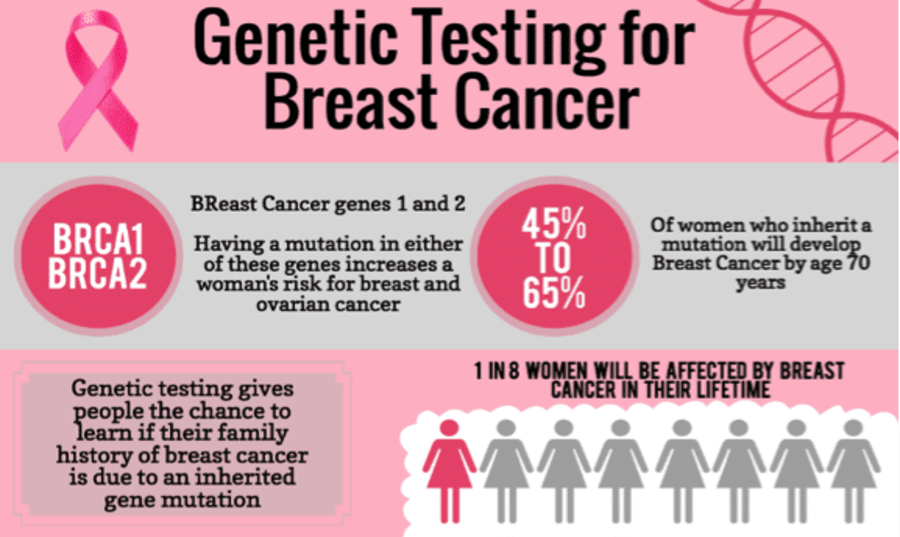 BRCA1 and BRCA2 Test in India

What is the BRCA Gene Mutation?

BRCA1/2 carriers who get ovarian cancer appear to have better survival than non-carriers in the first 5 years after diagnosis. Breast and ovarian cancer are the most common diseases linked to BRCA1 and BRCA2 changes, but mutated forms of the BRCA genes may increase people's risk for other cancers as well.

Who should consider BRCA1/2 genetic testing?

BRCA1/2 is only recommended for people with a high risk of having a BRCA1/2 gene mutation, including those with

What Is the Risk of Inheriting a BRCA mutation?

All people have two copies of the genes BRCA1 and BRCA2, and both men and women can pass down mutations in these genes. If you have a parent with a BRCA1 or BRCA2 mutation, there is a chance you inherited either the mutated (nonworking) BRCA 1/2 gene or the working BRCA gene from this parent.

BRCA1 and BRCA2 are two examples of genes that raise your cancer risk if they become altered. Changes in your lifestyle can sometimes reduce your individual cancer risk.

The cancer risk caused by BRCA1 and BRCA2 mutations is inherited in a dominant fashion even though usually only one mutated allele is directly inherited. This is because people with the mutation are likely to acquire a second mutation, leading to the dominant expression of cancer.

Do BRCA mutations increase the risk of other types of cancer?

Yes. Women who have a BRCA1/2 mutation also have an increased risk of cancer of the fallopian tube peritoneum, pancreas, and skin (melanoma).

In addition to BRCA1 and BRCA2, there are other gene mutations that can cause breast or ovarian cancer to run in a family, some of which have not yet been identified. Women with BRCA mutations may wish to consider taking drugs that prevent or delay cancer onset to help reduce their cancer risk.

How is testing for BRCA1/2 mutation done?

Before the test is done, speak to a genetic counsellor to decide whether to have the test.

While the risk for male breast, pancreatic, and ovarian cancers is thought to be increased, the exact degree of increase remains under investigation.

Hereditary breast and ovarian cancer (HBOC) syndrome is an inherited increased risk of breast cancer, ovarian cancer, and other types of cancer. BRCA germline pathogenic variants confer an excessive risk for ovarian cancer ranging from 16.5% to 63%.

What is the cost of the BRCA1/2 Test?

The time taken for the outcome of the results is 4-5 weeks. The reports will be sent to your email.

How to book an appointment for BRCA1/2 Test?

What Does a Positive Test Result for BRCA1/2 Test Mean?

There is no test that can tell which women with BRCA1 and 2 mutations will develop cancer or at what age. However, assessing your cancer risk is still difficult.

Having a BRCA mutation means you can pass the mutation to your children. Your siblings also may have a gene mutation. You are not obligated to tell your family members, but sharing the information could be life-saving for them.

What Does a Negative Test Result for BRCA1/2 Test Mean?

A negative test result for BRCA1/2 does not mean you will not get cancer. It may mean you have the same risk of getting cancer as people who do not have this mutation.