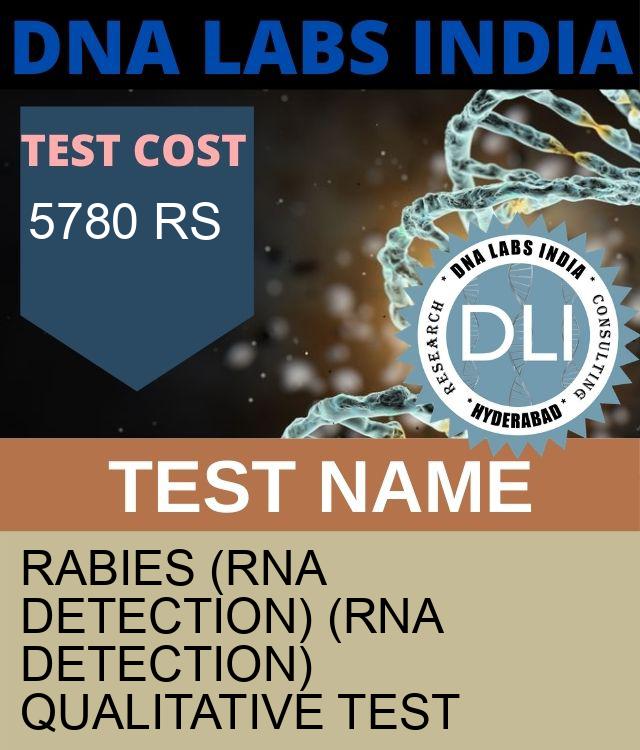 Why to get tested at DNA Labs India for RABIES Detection RNA Qualitative PCR Test ?

The first symptoms of rabies can appear from a few days to more than a year after the bite happens. After a few days, neurological symptoms develop, including: Irritability or aggressiveness Excessive movements or agitation Confusion, bizarre or strange thoughts, or hallucinations Muscle spasms and unusual postures Seizures (convulsions) Weakness or paralysis Extreme sensitivity to bright lights, sounds, or touch

Once a person begins showing signs and symptoms of rabies, the disease nearly always causes death. For this reason, anyone who may have a risk of contracting rabies should receive rabies vaccinations for protection.

Animals most likely to transmit rabies in the United States include bats, coyotes, foxes, raccoons and skunks. In developing countries of Africa and Southeast Asia, stray dogs are the most likely to spread rabies to people.

The first symptoms of rabies can appear from a few days to more than a year after the bite happens. After a few days, neurological symptoms develop, including:

How is Rabies Caused?

It is caused by the rabies virus and spread via the saliva of infected animals. The infected animal can spread the virus by biting another animal or a person. in certain rare cases, rabies can spread when infected saliva gets into an open wound or the mucous membranes like the mouth or eyes. This can occur if an infected animal were to lick at an open cut on your skin.

How is Rabies Diagnosed in Humans?

Several tests are necessary to diagnose rabies antemortem (before death) in humans; no single test is sufficient. Tests are performed on samples of saliva, serum, spinal fluid, and skin biopsies of hair follicles at the nape of the neck. Saliva can be tested by virus isolation or reverse transcription followed by polymerase chain reaction (RT-PCR).

Rabies is an overwhelmingly fatal disease, with only a few documented survivors. There is no effective curative treatment for rabies once clinical signs have appeared. All cases of suspected rabies exposure should be treated immediately to prevent the onset of clinical symptoms and death.

If you’ve been bitten by an animal that is known to have rabies, you’ll receive a series of shots to prevent the rabies virus from infecting you. If the animal that bit you can’t be found, it may be safest to assume that the animal has rabies.